We’re pleased to announce that a new version of Imunify360, an automated security solution for Linux servers, has been scheduled for gradual roll-out from our production repository and will be available for all customers in about two weeks or less.​ If you’d like to get it earlier, see instruction at the end of the post.

The Imunify360 version 4.5 release introduces the following changes and features:

Stand-alone (“no control panel”) version of Imunify360 is now available

Previously, Imunify360 had to be installed through a particular control panel, such as cPanel, DirectAdmin, or Plesk. Now, with version 4.5, it can be installed directly on the server, independent of any panel, regardless of managing interface.

There are four main steps required for the installation of the Imunify360 in a stand-alone mode on your server.

The more details can be found at https://docs.imunify360.com/stand_alone/.

We invite hosting panel developers, VPS and shared hosting providers to start integration with Imunify360 in order to have a comprehensive automated security solution on servers and add more value to the hosting service in general.

Contact our Imunify product team via feedback@imunify360.com for details. We’ll be happy to assist you.

It counts the number of unsuccessful attempts, and identifies the targets as single- or multiple-user accounts and considers the source of attacks, thus it blocks attackers in a more intelligent way. 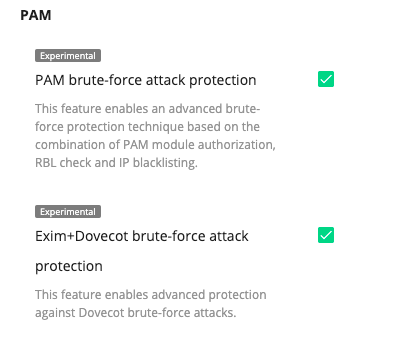 Now it’s possible to combine several servers into a management group in the Cloud Linux Network (CLN) and manage IPs in the Imunify360 within that particular group. Just log in with your CLN account, create groups, add some servers to them, and you can block/whitelist particular IPs among the servers in those groups.

Security and performance improvements and fixes

Please give us feedback on the latest release or share your ideas and feature requests with the product team via feedback@imunify360.com.

If you want to upgrade to the new Imunify360 version 4.5 right now, you can run the following commands:

For the regular and safe update to Imunify360 version 4.5 with a gradual roll-out